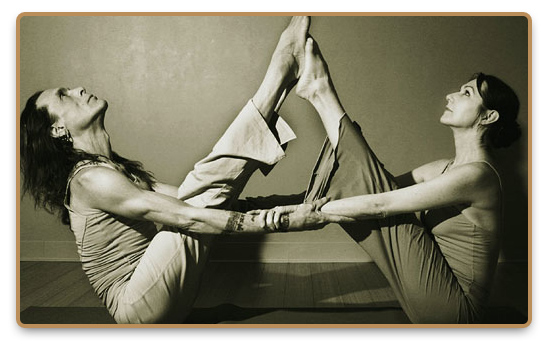 Jivamukti yoga is a style of yoga created by couple Sharon Gannon and David Life in 1984 after a trip to India learning Sivananda. The style has evolved over the years as they expanded their knowledge and deepened their yoga studies.

The “jivamukti” means “living liberated”, though they based the idea upon the sanskrit word “jivanmukta” which can be translated to “one who is living and enlightened”. It is a vinyasa-based practice and can often be very intense. Every Jivamukti yoga class usually has its own theme. 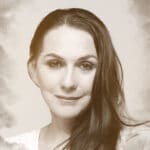 The practice of yoga allows us to become more conscious of our own physical existence and how significant we really are.

Jivamukti Yoga is a Playful Mixture of East and West

The founders of Jivamukti yoga have studied under numerous gurus and have mixed together the parts they feel are most important. Some of these teachers have included K. Patthabi Jois and Swami Sarasvati. They’d managed to create an almost hip version of yoga, a playful mixture of east and west. Their style still espoused the spiritual aspects, but as filtered through a New York City mindset.

On the walls of the studio, one could find pictures of not just famous yogis such as Paramahansa Yogananda, but also John Lennon and Bob Dylan. Classes will often feature an eclectic mix of music beyond the typical “meditation” music, instead playing jazz or hip hop.

By the late-90s, the studio had become extremely popular drawing a high-profile clientele of business people and celebrities including Madonna, Willem Dafoe, and Sting.

Jivamukti yoga has fallen under scrutiny over the last few years, less due to the yoga practice itself but scandals connected to the teachers and the culture of their teacher training program. In 2016, a former teacher filed a sexual harassment suite against one of the studio’s most prominent teachers, Ruth Lauer-Manetti. The studio quickly denied the allegations, but later settled the case for an undisclosed amount.

Other students over the years have been silenced from speaking about the conduct of the studio through non-disclosure agreements. These payments have suppressed numerous complaints against some of the teachers, though there has not been much to suggest these were sexual in nature.

Jivamukti yoga has been criticized as being like a cult, with the founders’ dominating personalities having a strong influence over many of the members’ political beliefs. Primarily in their extreme support of vegan lifestyles and opposition to childbearing. They also make sure to complete various charity work, including the opening of environmental centers, and strive to be as green as possible.

Their main studio in New York City closed in 2019, though this had little to do with their legal troubles, and more with the excessive rental costs of the location and fundamental changes in the city’s yoga market. Despite this, Jivamukti yoga is as popular as ever. Through the many years of its teacher training program, their brand of yoga has spread around the world with studios in Sydney, Los Angeles, Barcelona, London, and other cities.

Jivamukti Yoga is a Lifestyle

Jivamukti yoga is more than just a type of yoga, but a lifestyle. It has been compared to a cult at times. For example, the couple’s animal activism is in full display. Some have reported that their yoga class was interrupted so that Sharon could show the class a documentary about the cruel practices surrounding the use of animal products. At the end she handed out pamphlets on the advantages of a vegan lifestyle.

See How to Practice Jivamukti Yoga with a simple device.

Although the classes do have an exercise component like most modern yoga styles in the west, this is just one small part of the goal to enlightenment. Jivamukti yoga is based on five different pillars.

The Five Pillars of Jivamukti Yoga

Ahimsa: a Non-Violent and Compassionate Lifestyle

The first of which is “ahimsa”, a general aim for living a non-violent and compassionate lifestyle. This compassion is not just towards others, but oneself. Students are encouraged to interact with others in a positive way. They also are against violence towards animals, which is directly exhibited by their strong support of veganism.

Because of this tenet, Jivamukti yoga is strongly involved in environmental movements and charity work around the globe. They are also supporting members of PETA and are involved in political activism to help improve animal rights and environmental protection.

The next is “nada”, or deep listening. The founders espouse the belief that all living things have their own vibrational energy that one can learn to listen to. One of the aims of hatha yoga is to hear “om,” which is the place where all sound dissolves, or rather the soundless sound. So Jivamukti yoga aims to teach its students how to listen. By learning how to listen to external things, students can learn how to focus inward. This is done in a few ways. Music is used in all the classes, sometimes from a wide variety of influences. Students are also led in chants.

Another unique feature is that the teachers do not demonstrate the vinyasas in the front of the room like in many yoga classes. The students are led instead by the words of the teachers, forcing them to focus on what is said, instead of merely watching the teacher. The classes will also feature periods of silence.

Another of the major focuses is “shastra”, or study of the ancient yogic texts. The simplest ways this is incorporated is through the aforementioned chanting. Those wishing to become jivamukti teachers are encouraged to learn Sanskrit so they can read the philosophy in its original language. Even casual students are encouraged to learn about the yogic scripture. Patanjali’s Yoga Sutras, Svatmarama’s Hatha Yoga Pradipika, and the Bhagavad Gita are the primary works explored, but other more modern works of philosophy are also studied.

The founders believe that the texts should never be “dumbed down” and make sure that every Jivamukti yoga class features some discussion of these works, and tries to find ways to make them relevant to modern times.

“Dhanya”, or meditation, is one of the most important parts of the practice. The goal of the meditative practice is divorce oneself from their thoughts, allowing them to just pass by our consciousness. All classes will incorporate some amount of meditation.

The fifth and final pillar, “bhakti” is in some ways the culmination of the other four. It is the acknowledgement that the ultimate goal of any yoga practice is self-realization and a devotion to god, or even unconditional love.

God in this respect is not necessarily a deity, but just something greater than oneself. This is expressed through chanting or selecting an intention for every practice and classes usually have a theme. The studios often have pictures of inspirational people or religious figures ranging from Ghandi to John Lennon to the Buddha.

What to Expect in a Jivamukti Yoga Class?

These pillars are all utilized in a typical Jivamukti class. On a practical level, classes will feature music, chanting, meditation, discussion of sacred texts, and some asana practice. In jivamukti, the original definition of asana, meaning “seat” or “connection” is used. The asanas are there to help students build their connection to the Earth and all living things. This does not mean that one cannot get a good workout from the practice.

The exercise component is vinyasa based, meaning it focuses more on connected postures and movement, than holding poses for a long period of time. Sun salutations and warrior poses are very common. The difficulty of the classes can vary, but they can often be quite rigorous.

Despite the fact that exercise is not the primary focus of the practice, one cannot ignore that taking part in regular asana-based yoga benefits one’s physical fitness. In general, yoga has found to be an effective style of exercise across a range of metrics.

Anecdotally Jivamukti yoga has been described as quite intense. This may have some cardiovascular benefit akin to aerobic exercise. Many practitioners attest to its ability to improve balance and flexibility, as well as its ability to tone the muscles. Due to the incorporation of deep breathing, it is said to help increase circulation.

Yoga, especially vinyasa yoga styles, have been shown to help improve concentration and coordination. This is a result having to carefully move from one difficult position to the next. Some studies have shown that a related style, ashtanga yoga, can improve one’s short term memory.

As stated above, this practice has a strong meditation component. Studies have shown that meditation can have a myriad of health benefits. Among the most notable is its ability to reduce stress. Our cortisol levels can have an adverse effect on our health, so safe stress-reducing practices such as meditation is seen as beneficial. In general, regular yoga or meditation has been shown to reduce anxiety and some of the symptoms of depression.

One of the biggest benefits of Jivamukti yoga is its encouragement of a vegan lifestyle. Numerous studies have shown that a balanced vegan diet can have many health benefits when compared to standard Western diet. Naturally, this depends on which foods a person eats. In general, by eliminating animal products, many choose to eat more nutrient rich foods such as whole grains and vegetables.

Many people experience excess weight loss when switching to veganism, which could be even more pronounced when combined with the rigorous exercise of the yoga practice. Eliminating meat from one’s diet can have positive effects on liver function. Some studies suggest that veganism can correlate with a reduced risk of certain cancers.

Intense yoga practices always come with a certain risk of injury. Jivamukti teachers receive a very high-level of training. On the advanced level, teachers have had 800 hours of training. This is in addition to the years of yoga practice required as a prerequisite to their teaching training program.

Since teachers do not demonstrate the positions at the front of the class, this frees them to walk around the class and ensure they have proper alignment when doing the poses. This could reduce some of the risk of injury.