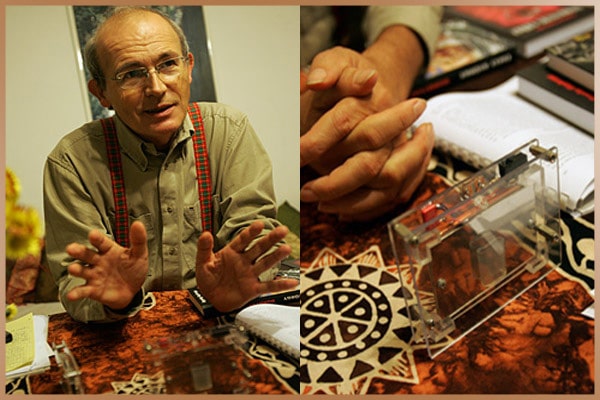 The vitality meter (Egely Wheel) will be produced also in a more complicated, more sensitive version, more suitable for medical use and for the measuring paranormal activites. This device will be able to detect this effect even from a distance of about 1.5 – 2 meters, even if somebody just concentrates and stares at the Egely Wheel. In this case, there is no question of thermal effect, it is clearly some other kind of an paranormal interaction. But what can this paranormal interaction be?

Clearly the interactions such as electromagnetism or gravitation cannot cause this paranormal phenomenon in their form thought to be scientifically known today. Moreover, if something cannot be described in terms of known interactions, then it does not exist – at least this is what some of us think. But nature does not function this way. It’s not a smaller or bigger group of scientists who decides what can be and what cannot. In nature everything is natural, even things that might seem paranormal to the human mind. Don’t forget for a moment, that we are dealing with with the most complicated organization of matter. We investigate an interesting function of the human mind and not only for the sake of curiosity. The human mind has many unknown and undiscovered functions, so it’s not a surprise if we meet with old unsolved problems and ancient secrets in this field such as paranormal phenomena.

See How to Practice Telekinesis with a simple device.

One of the brain’s most fantastic features has been known for some time in the literature of medical science, i. e. there are people among us with average or more than average intelligence and capable of what we call paranormal activity in spite of the fact of not having hardly any brain tissue. (R. Levin: Is Your Brain Really Necessary?, Science Vol. 210, pp 1232-1234, 1980.) Average people have a brain that weights about 3 lbs. These exceptional men or women have merely some decagrams of it, the remaining volume of their skull is filled with spinal liquid.

In these people, there are no traces of the brain structure, that can be found in others. In principle, ï¿½creaturesï¿½ like these could not exist, but nature ï¿½knowsï¿½ more than the scientists studying it. To understand this paranormal phenomenon a few decisive steps must be taken in the research of nature, but even then we shall not understand completely the functions of the mind.

It is not completely clear yet if the rotation itself is the basic effect or it is just a side effect of a much deeper, more fundamental paranormal phenomenon. If it occurs only around electric wires or magnetic fields, or the wires produce light when heated. All these are just side effects of the real phenomenon of electric conduction. Experiments have shown, so far, that if there is a large amount of bioenergy coming out of somebody, other side effects can occur. For example, the electric conductance and magnetic characteristics of objects may change, or a photochemical reaction can take place. A drastic change can take place in the optical features of the objects, also the same can happen with their structure and solidity.

What we are trying to say is that the rotation is not the main effect but a side effect, and then we can be talking about paranormal activity. As we noticed, when electricity heats up an electric wire, the heat tells us the amount of electricity passing through, but the heat itself is not the reason for the origin of electric current. By just examining the wires heat we will not understand the essence of electric current. For this reason, we must search more deeply into the subject to find out the real cause. But right now, there is no reason why we should go so deep into the subject, because this is only a booklet of instructions. In a few years’ time it may be possible to bring this type of energy to life artificially, so do not think that it is hopeless to understand this phenomenon.

The research must be continued and the solution should be found somewhere in the structure of time and space. Nowadays, people think that the world is practically empty around us, in other words, if from a given volume of space we take away the matter, e. g. we suck out the air and cool this volume down to a very low temperature, then we shall get an empty space there. The physical reality is completely different. What we would say is nothing, a vacuum, is really a very dense substance consisting of a great amount of energy. In the past, it was called ether then physics forgot all about it for a long time and now it returns through the “back door” as vacuum energy. Now this vacuum can be excited in many ways. Just the presence of electric charges or their movement can excite it, these produce electromagnetic fields. Also, the presence of mass excites it, and it could be due to this that a gravitational field appears. Also, the rotation of electrons, magnetism, or the organised movements in living beings can excite vacuum. When excited, the vacuum can bring about a number of changes that were unknown up until now or we were unable to describe them with our present knowledge, but we have all the hope that we shall be able to do this in the near future.

The possibility of exciting the vacuum with rotation was first talked about by Einstein’s research fellow, the French Cartan. But it’s only nowadays that science is going deeper into this subject. The history of science was always like this. There were constantly new discoveries in nature that science could not explain. It’s no surprise that nature shows its true wealth at the most complicated structure of matter, at the functions of the human mind, and it’s here where we still meet many unknown paranormal phenomena. This strange substance, the vacuum can be excited not only with interactions, but also with some kind of geometrical forms. It may not be by chance that pyramids played a great role in the history of many people. These monuments are not just cultic buildings but they trigger interesting unknown biological and physical effects. There are geometrical forms at some Christian churches that may also trigger positive effects. Science does not know these paranormal phenomena, it does not even recognize them. For their revelation, not much effort has been made. Although, primitive measurements on the pyramids show that there are very important physical and biological changes taking place above and below the top of them. These are connected with the different excitations of the vacuum. This super dense and super fluid, but in some cases elastic vacuum, can be brought into oscillation in many different ways. If this takes place then all the unusual phenomena happens. The examination of this substance is being left to the science of the future, to the so-called space technology.

This small device is unique, the first one of its kind, mass-produced so that a wide range of people can have the possibility of buying and using it regularly. Of course, we cannot consider pyramids as consumer goods, they were built for exceptional people. From the vacuum, by its excitation, we get a special particle which I assume to be the bearer of vitality. Many signs show that the magnetic monopoles, or magnetic current, are responsible for these strange phenomena. Researchers agree that magnetic monopoles should exist. Paul M. Dirac was the first one to predict this about fifty years ago and since then scientists have been looking for them. They were first found in 1820, but then were forgotten. Then Felix Ehrenhaft, an Austrian scientist did pioneering work in this field. He was the man who worked out the measurement of the electron charge. But in the history of science, it was the American, Millikan, who received the reward. His name was not forgotten, unlike his colleague’s.

From the 40’s onwards Ehrenhaft published about one hundred articles in qualified journals stating his experimental results, but it was all in vain, his contemporaries did not seem to be interested in his findings.

The Russian, V. F. Mihailov, repeated Ehrenhaft’s measurements more effectively and precisely but his contemporary scientists did not know his work either. In theory, lots of features of the magnetic monopoles are known. For example, all materials conduct it, it changes the electric, magnetic and solidity characteristics of objects. The magnetic current brings about the same changes as observed in the case of paranormal phenomena. If we could produce more magnetic monopoles and magnetic current with Ehrenhaft’s method, a lot of unusual and interesting phenomena would become usual and normal. The bioenergy, the vitality, and other unusual things would become clearer to us.

As you can see the vitality meter is more than just a toy, it’s a warning sign. It shows that there are still many things unknown to natural science.