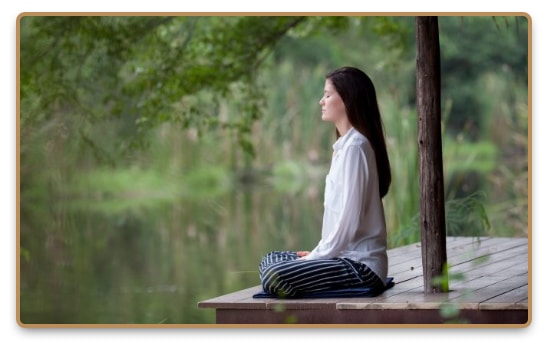 Zazen meditation is a type of Buddhist meditation technique, where one sits silently and upright, usually in full-lotus, while breathing regularly in an attempt to “still the mind”. The word “zazen” can be translated to “seated meditation” or “zen meditation”.

Much of our conception of zazen meditation comes from the writings of Dogen Zenji, who founded the Soto school of Zen in Japan in the thirteenth century. However, the practice of zen meditation may stem back to 7th Century China of the Tang Dynasty. 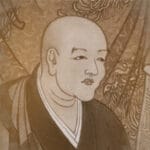 Zazen is an activity that is an extension of the universe. Zazen is not the life of an individual, it's the universe that's breathing.

The Posture of Zazen Meditation: Kekka-fuza

Dogen says in his writing that kekka-fuza, or full-lotus position is essential for the true practice of zazen meditation. This is a cross-legged position in which both feet are placed upon the thighs. In addition to the famous leg placement, one needs to focus on having a vertical alignment of the body. If one leans, it will cause undesired tension in other muscles to support the body, which may draw one’s attention away from the breath. With proper alignment, it is much easier for the body to achieve unity.

Other writers say that one doesn’t have to sit in kekka-fuza to get a benefit from zazen meditation. Most recommend sitting upon the floor. A zafu—which is a special pillow for meditation—or some other cushioning is commonly used so that the pelvis can be raised and the knees can reach the floor.

See How to Deepen Zazen Meditation Practice with a simple device.

Some alternative positions to kekka-fuza are: half-lotus, which is similar to full-lotus, but only one foot is resting on the thigh; Burmese position, which is another cross-legged posture, but both feet are on the floor; seiza, which is basically kneeling on the floor while resting the butt on the ankles or a pillow; and finally just sitting straight-backed upon a chair with the feet flat on the floor.

The Importance of Proper Alignment

No matter the position or posture you use, it’s important to maintain proper alignment so the diaphragm can expand and air can move freely. The head should sit comfortably, but still be aligned with the rest of the spine. It is common to tuck your chin in slightly. Some feel that one can get meditative benefits without even sitting in traditional meditation postures.

Zazen meditation is traditionally practiced in a meditation hall called a zendo, but given that not everyone has access, people are often content just meditating at home in a room void of distractions.

Some can find themselves unsure of where to set their hands during zazen meditation. One popular option is holding them in a “cosmic mudra”. The hands are placed into the lap, palms up, with the dominant hand underneath, holding the other. Put your thumbs together so your hands form an ellipse. It is believed that if you cannot form a proper oval with your hands, it’s a sign that you are not focused on the meditation.

Focus on Your Breathing Patterns

Once you are in the proper position, begin to deepen your breathing, inhaling and exhaling through the nose with the mouth closed. You want to find a natural rhythm to the breath. Most sources mention that you should focus on your breathing patterns.

There are different ways to do this. One way is to count the duration or number of cycles of inhales and exhales. This is an effective way to recognize if your thoughts begin to wander. If you lose count, just start from the beginning again. Another way is to focus on the sensation of breathing, particularly the sound of the airflow and the feel of your expanding diaphragm.

It is important not to put effort into suppressing your thoughts. The keys are position and breathing. If you enter into the practice with the goal of shutting off your thoughts, you may become more likely to fixate on them. This has been shown in the famous “white bear experiment” of David Wegner, where participants were asked not to think about “white bears”, but found their minds returning to the bear incessantly. Instead, one should let their thoughts come and go without judgment, much like in mindfulness meditation practices. Have patience and keep your focus on the breath.

Another possible method is to focus on a koan, which is similar to a mantra. It’s a phrase or question that one considers while meditating. One of the most famous is, “What sound does single hand clapping make?”.

Some choose to close their eyes while meditating, but it’s not always necessary. Some even recommend keeping the eyes open, but relaxed while gazing upon the ground about a meter before you. The most important thing is not to concentrate on what you are seeing. One tip is to meditate while facing a wall. Closing one’s eyes has the possibility of inducing sleep or daydreaming, which is not desirable during zazen meditation.

What is The Difference Between Zazen Meditation and Yogic Meditation?

Some writers like to equate this style of meditation with that of the yoga traditions, but there is some disagreement. According to the writings of Dogen, there should be little manipulation of the mind—such as the practice of counting or visualizing breaths—as there is in other meditation techniques. By doing this is, it implies the idea of the mind as separate from the body.

However, some modern scholars interpret Dogen’s writing to say that the practice is merely sitting in a correct kekka-fuza position, and nothing more. He wrote, “sit in kekka-fuza with body, sit in kekka-fuza with mind, sit in kekka-fuza of body-mind falling off”. The idea is to unite the whole body, including the mind into a single organism. By sitting in this position we suppress our bonpu, which is our non-enlightened side, and is thought to be directly connected to our minds. Practising zazen meditation puts us in a place where human desires and thoughts melt away, and this brings us into a state where we can just “be”. This idea is reinforced by the writings of Dogen who said, “To study the Buddha Way is to study the self, to study the self is to forget the self, and to forget the self is to be enlightened by the ten thousand things”.

What is The Right Amount of Time for a Zazen Meditation Session?

Although many do get benefit from longer sessions, even two one-hour sessions a day, it is not a requirement. People can often start with five minutes and work their way up to more extended periods. Even five minutes of deep breathing can have some benefit.

Some have reported that a regular practice of zazen meditation can help them concentrate more. It is also claimed to help one sleep better, possibly because it trains the practitioner to relax more easily. Some have mentioned that it helps them focus on their daily tasks more and allows them to approach projects without feeling rushed. People have also noted that zazen meditation may improve one’s mood and help them be more patient. Some studies seem to support the cognitive benefits, with many people reporting an improvement of concentration. Other studies have suggested that meditation can help prevent people’s minds from wandering when completing certain tasks. There may even be evidence that meditation can help people access subliminal thoughts.

There seems to be evidence that meditation, namely mindfulness meditation, which is somewhat similar to zazen meditation, can help reduce the symptoms of anxiety and depression. It can also reduce perceived pain. There’s some indication that it may improve quality of life as related to mental health. Some studies have shown meditation can help lower blood pressure and heart rate. A reduction of stress and cortisol levels may be connected with an improvement in immune function. In Taiwan, Zazen is being used with some success as a treatment for drug dependency.

It is important to recognize that a lot of the benefits are the result of regular practice. Therefore, many teachers remind their students not to be discouraged if mediation does not “change their life” immediately.

Meditation Can Increase Anxiety in Some

One problem with some meditation studies is that they don’t always account for participants who couldn’t strictly follow the procedures, or those who stopped the practice. This possibly suggests that some people may have had negative experiences that pushed them to quit meditation. In some cases, meditation may even increase anxiety. Therefore, zazen meditation may not be for everyone.