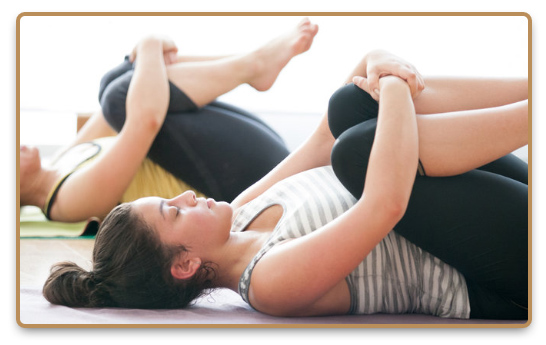 Yin yoga is a style of yoga that focuses on holding certain positions for a long amount of time, often for minutes. The main goal is to increase flexibility in the joints and connective tissues so that one is better able to sit in meditative positions for longer periods. Although it can be seen as exercise, yin yoga is considered to be among the more relaxing forms of yogas, often due its slow pace.

Despite sharing some likeness to other slow yoga types such as restorative yoga, it separates itself by not using props and welcoming some discomfort when holding the poses.

Yin Yoga is a Mix of Hatha Yoga and Daoist Philosophy

Like many styles of yoga, yin yoga is a modern conceptualization of yoga that is based upon much older philosophies. It can be seen as a mixture of hatha yoga and daoist ideas of harmony. The primary founder of yin yoga is usually listed as kung fu master Paulie Zink, who began to develop the practice in the 1970s, calling his hybrid style of hatha and taoist yogas “Yin and Yang Yoga”.

At first it was primarily the interest of martial artists looking to improve their flexibility. It was Paul Grilley that helped bring it to the masses.

When you develop flexibility, every component of your body is affected: muscles, tendons, ligaments, veins and arteries, bones, organs, circulation, and energy flow. As long as you are alive, you are growing new cells. Your bones are alive and living in your body. So even your bones can grow and change shape and increase in density. I don’t think of a body as an assemblage of parts like a machine. I think in terms of wholeness. We are each an organism - not a mechanism.

He studied under Zink, amazed at how holding poses for long periods of time was able to allow him to sit comfortably in meditative poses such as lotus for extended periods, something he had struggled with from a typical “yang yoga” practise.

He continued to teach this new form of yoga to others, his profile possibly increased by his marriage to president Ronald Reagan’s daughter Patti Davis during his presidency. The name itself was said to be coined by his student Susan Powers, who went on to become a renowned yoga teacher herself, who developed her own related style called Insight Yoga. Yin yoga has become increasingly popular in the last few years.

Yin yoga classes are typically a bit slower than many of the other popular styles today such as Power yoga or Bikram yoga. Because the asanas are held for a longer period of time, often between three and five minutes, and even up to twenty, it is more meditative and has a focus on increasing one’s awareness of their body.

See How to Practice Yin Yoga with a simple device.

Many of the positions in themselves may not seem too difficult, but maintaining them for such durations could be strenuous for many. Gravity increasing over time is used to deepen the stretches, helping release muscular tension.

As its name suggests, it is meant to be a balance to the more typical “yang” styles of yoga that have become so popular such as Ashtanga, Bikram, or Iyengar yoga. Yang poses are typically a bit more strenuous and help increase strength. The yang of the practise comes more from moving between the various poses. Yang refers to heat and movement, whereas yin focuses more on permanency and stillness.

Yang is more a muscle-focused energy, while yin is more focused on the joints and ligaments. It is important to recognize a balance of the two forces. The yang forces are best for warming up the muscles and priming the body to be more elastic for a yin practice.

Even though many of the poses may resemble or even be identical to many of those which are familiar with a typical yoga practise, it gives a different name to nearly every asana. This is not for branding purposes, but mainly to highlight the emphasis on release instead of contraction.

For example, the plow is called the snail and the one-legged pigeon becomes the swan pose. Given that it is nearly impossible to stretch connective tissues when the muscles are tensed, there are many poses that cannot be done in a yin yoga practise. Standing poses, inversions, and positions involving arm balancing are some examples. Instead, it mostly focuses on sitting and supine poses, forward bends, balanced with back bends, hip openers, and twists.

It is not without its own esoteric belief system. For example, it utilizes the daoist idea that there are different elements (earth, fire, wood, metal, and water) that can represent different ways that energies flow through the body. It is believed that this practise can increase the amount of qi / chi or vital energy flowing through your body which can have many beneficial effects. It is likened to the positive effects one gets from acupuncture.

There is anecdotal evidence that suggests that it can be beneficial for relieving joint pain, or least train one to tolerate joint discomfort a bit more. It has been suggested that the types of stretching employed by yin yoga could help reduce inflammation in the joints and may also improve the hydration of the fascia.

It is claimed that this practise can help increase the body’s qi / chi, or vital energy flow. There is a belief that the meridians, or energy channels, described in the energy systems espoused by Chinese traditional medicine correspond directly with the connective tissues that are stretched by this practise.

Therefore, it is argued that it can unblock energy blockages that are believed to cause some various ailments to our physical, spiritual, and emotional health. So in a way, this is akin to energy healing.

Yin Yoga can be Beneficial to Our Mental and Emotional Health

Multiple studies have shown that yin yoga specifically can be beneficial to our mental and emotional health. Many practitioners say that it greatly relieves stress and anxiety. There’s also been some suggestion that this type of yoga has the ability to help manage the recovery from trauma and manage addiction.

Holding these positions for a long amount of time can teach people how to deal with the discomfort some emotional issues inflict. It is also said that given the deep breathing, it can cause an emotional release for some. Different studies suggest that it can help increase mindfulness and quiet the restless mind. In addition to this, practitioners have reported a decrease in stress and worrying.

Meditation and other activities can be seen as being beneficial to one’s health, mostly because they reduce the levels of cortisol in the body, which can have adverse health effects. It has been shown that this type of yoga can help with depression and reduce sleep problems.

Yin Yoga is a Safer Alternative

Given its slow pace, yin yoga may be a safer alternative for those who wish to explore some of the benefits of yoga, with a lower risk of injury. This does not mean it doesn’t have its own risks. The connective tissues are very fragile, so it’s important to only move the joints in ways they are meant to move.

Also, it is best to go into the stretches gradually, because too many dynamic movements can cause strain on the joints. It is not uncommon for people new to yin yoga to experience some soreness in the joints akin to a minor strain. Therefore, it is best to be careful and not over do it, especially at the beginning.