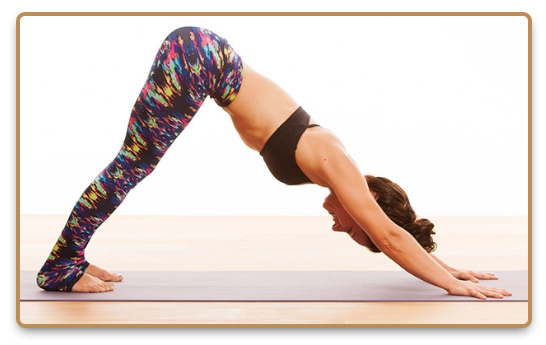 Vinyasa yoga can refer to a few different yoga styles, but most have a similar focus on connected movements instead of holding poses for a long time. It can almost be seen as a foil to hatha yoga.

The word vinyasa comes from Sanskrit meaning “movement” or “position” (other sources list it as meaning “connection”), though it is used in English to primarily refer to the movement between asanas in a yoga practice, or a series of asanas. In regular usage,” vinyasa yoga” is most often used to refer to Vinyasa Flow Yoga or simply flow yoga.

Even though a vinyasa yoga practice has branched off in a few different directions and has many pioneers, the grandfather of this style is generally considered to be Tirumalai Krishnamacharya. His influence is so great, he is often hailed as the father of modern yoga, taking the ancient Vedic texts and bringing them into the twentieth century.

Although yoga is an ancient practice, it is said that our very concept of an asana, taking numerous poses and linking them together in concert with the breath and drishti, or looking direction, was created by Krishnamacharya. He was the mentor of four of the main gurus to bring yoga out of India: Indra Devi, B.K.S Iyengar, Ashtanga pioneer K. Pattabhi Jois, and his son T. K. V. Desikachar, who popularized Viniyoga.

It was his teachings that put a particular emphasis on asana practices and led to the western view of yoga as a method of exercise. Despite this, he never took credit for his work, saying he was only teaching what he found in the ancient texts. It is said that he may have developed this higher energy style so that he could maintain the focus of his young, athletic students.

Turning it into a physical practice, it left students potentially able to quiet their restlessness so they could focus on spirituality. Of all of his students, Jois and his strict series of asanas, has probably had the biggest role in bringing a vinyasa focus to world prominence and it’s hard to imagine that vinyasa yoga would exist without him.

Subjects are of two categories, one category can be learned merely through words, by listening and understanding—these are theoretical subjects, like the rules and analysis of grammar. The other category needs to be practiced, like music, cooking, martial arts, and yoga as well. Nowadays, the practice of yoga stops with just asanas. Very few even attempt dharana and dhyana (deeper meditation) with seriousness. There is a need to search once more and reestablish the practice and value of yoga in modern times.

The most important aspect of a vinyasa yoga practice that sets it apart from the others is its focus on movement. The idea is that most of the asanas are connected together into a single flow from one position to the next. Very little time is spent holding a single position, like in many hatha yoga practices.

See How to Practice Vinyasa Yoga with a simple device.

It is suggested to use Ujjayi breath during this practice, which is done by closing off the throat (specifically constricting the glottis) gently while breathing through the nose to create an ocean sound. This is said to come with many benefits over normal breathing.

Sun Salutation is The Most Famous Vinyasa

One of the most famous vinyasas is the sun salutation. However, there exists numerous forms.

In one of the most common, you begin in a standing position and breathe in as you stretch your arms above your head, then bend over with your hands to your feet as you breathe out. With an inhale, you lift up to a flat back position with your hands at your knees, then exhale as you drop down with your hands on the ground and jump the feet back, settling by lowering yourself onto your stomach. Then you lift yourself up into cobra or upward facing dog while breathing in, then lower down, pushing yourself up to a plank, then into downward facing dog as you exhale.

This set of movements is so instrumental to the practice that the sequence, plank to cobra/upward facing dog to downward facing dog is often just called a “vinyasa”. Vinyasas often have a circular component, ending in the same position in which it started. Mastering the sun salutation is one of most important practices in vinyasa yoga.

Within the umbrella of “vinyasa yoga” there are a few different styles, each with their own particular focus. Among the most well known of these is Ashtanga yoga as developed by K. Pattabhi Jois. Although it does focus on all eight limbs of yoga, Ashtanga is based on the belief that having a daily asana practice and strong body are crucial to the more spiritual aspects. What makes Ashtanga unique is that it has a set series of positions that must always be practised in the same sequence with no variations. There are six separate sequences of increasing difficulty and a student cannot move onto the next until mastering the former.

More than just postures, Ashtanga also has a very specific drishti and breathing pattern with each position. Although it is considered a type of vinyasa yoga, it is rare to ever see it labeled as such.

Two other common styles that utilize vinyasas are vinyasa flow yoga and power yoga. Both can be seen as offshoots of Ashtanga yoga.

The primary developers of power yoga, Bryan Kest and Beryl Bender Birch, were students of Jois. Power yoga is typically a more intense version of yoga, with the primary focus on exercise and strength building, though the founders assert that they take the spiritual aspect of the practice very seriously.

Vinyasa flow yoga can take a variety of forms, be either rigorous or gentle, but always focuses on the smooth transition from one position to the next.

Both styles are teacher driven. They don’t follow the set sequence that Ashtanga yoga, but instead can be whatever the teacher or student feels is best for that day or the class. This can make it a bit more interesting to those who tire of doing the same thing day after day.

Many classes are often a hybrid of multiple styles, but always focus on the flow. Given that a good number of these names are trademarked, it is not uncommon to see similar classes labeled as simply “vinyasa yoga”.

Due to its focus on movement, most forms of vinyasa yoga can be considered a moderate workout. Some forms, namely power yoga, are vigorous enough to be aerobic exercise, with clear cardiovascular benefits. In general, it can help improve strength throughout the whole body. Also, because it usually utilizes limbs in a variety of directions, it can help improve one’s range of motion.

Due to the concentration needed to move from one position to the next smoothly and safely, these types of vinyasa yoga can be particularly good for improving coordination and balance. This is therefore beneficial to brain functioning. One study on Ashtanga yoga showed that a regular practice can improve one’s short-term memory and concentration.

Some view these types of yoga as a form of moving meditation and many find that the practice relieves stress. Due to the very negative effects of stress and cortisol on the body, it is encouraged that non-destructive, stress-relieving activities such as yoga can have a benefit on one’s health. Possibly because of its meditative aspects, yoga has been explored as a therapy type to help with the treatment of mental disorders. It has had a notable effect on depression and anxiety.

Vinyasa Yoga Can Potentially Cause Injury

It is argued that having a yoga class with a set sequence like Ashtanga yoga can potentially cause injury from the stress of doing the same movements again and again, so they argue that varied practice may be safer. It is often encouraged by teachers that students should move with intention. Some of the transitions can be jarring if done too fast, and if using momentum to push into the next position, this could lead to injury. These movements should almost be seen as a dance.

In general, using the proper technique makes the practice much safer and it is important to lead up to some of the more advanced positions, making sure you have the strength to support yourself. It is not recommended that pregnant women or those with arthritis trying more intense vinyasa yoga practices like power yoga.

Some have criticized vinyasa yoga classes, saying that due to their lack of a set sequence, some classes can be unbalanced in the positions they choose. This can also lead to injury. In general, the criteria of training for being a vinyasa yoga teacher is less than needed for Iyengar yoga or even Ashtanga yoga courses.

However, even experienced teachers have been reported as having forced their students into too advanced positions, causing injury.