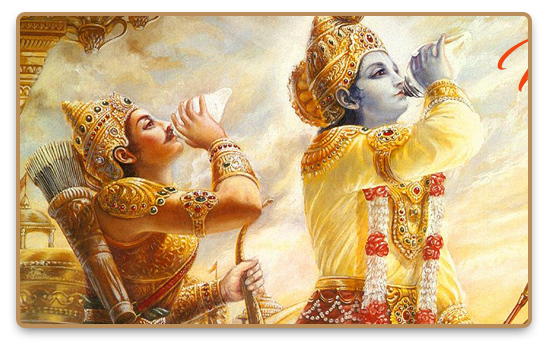 Karma yoga can be translated as “the yoga of action” as “Karma” is sanskrit for “action”. Along with Bhakti yoga (yoga of devotion) and Jnana yoga (yoga of wisdom), it is one of three traditional Hindu paths to moksha, or spiritual enlightenment.

However, not any action is considered karma yoga. The idea is to do something without concern for personal gain.

The concept of karma yoga was derived from the Hindu epic, Bhagavad Gita. The hero Krishna is giving advice to a prince Arjuna when on the brink of war. He tells him that he should fight out a duty.

The philosophy behind this is based upon a short passage: “Your work is your responsibility, not its result. Never let the fruits of your actions be your motive. Nor give in to inaction. Set firmly in yourself, do your work, not attached to anything. Remain even-minded in success, and in failure. Even-mindedness is true yoga.”

Please note that this is not a method of exercise as many Westerners associate with yoga.

Most people are familiar with the popular usage of the term “karma”, as its referral to the law of karma. The general idea is that the things we do are stored in a bank of good or bad actions and intentions and these will be used to determine our future in the cycle of reincarnation. Simply, one “reaps what they sow”.

See How to Practice Karma Yoga with a simple device.

Karma yoga is related, but has less of a focus on whether an action is good or bad. The goal is to act without attachment or concern for the reward one gets. So, doing something for the purpose of gaining “good karma” is not actually karma yoga. There is a sense of love and mindful duty to the action itself.

The most important element of karma yoga is vairagya, or non-attachment. This does not mean apathy as one may assume. Although it is nearly impossible to act without any concern for the result, the aim is focus on the action or work itself without thought for gain (or even success or failure for that matter), which could be distracting, not just for the task, but also for the path to enlightenment.

Everything should be done for the sake of devotion with mindfulness, and be a yaghya, or sacrifice. This can also be interpreted as doing things so that others besides oneself can benefit. When somebody can reach this state of action, then every task becomes a form or worship. It is sometimes recommended to chant mantras during action as well to put oneself in the right mindset.

This should not be viewed as a “practice”, but more of mindset and way of life.

This practice has the ultimate goal of reaching spiritual enlightenment, or moksha. When this point is reached, the ego dissolves and one is removed from the cycle of rebirth. Karma yoga has been considered among the quickest ways to reach enlightenment, especially since it can be combined with other yoga disciplines.

There are numerous models of what moksha means specifically, but most sources seem to agree that this is akin to a state of bliss or at least one divorced from the trappings of the desires of the self, which can often be a source of discomfort. This allows the yogi to live a state of freedom and true love.

Karma Yoga and the Workplace

As Indian businesses play a larger part in the world stage, there has been a greater initiative to study the country’s work habits and its connection to job performance. Studies have shown that the concept of karma yoga, or a sense of duty to work, is a well-ingrained value in the Indian workforce. Some researchers suggest that it can be integrated into a transformational leadership model to help improve performance (let us ignore that implementing these ideals for the purpose of improving performance goes against the very idea of karma yoga).

There has been a positive link shown between individual performance when working in a group and the practice of karma yoga. There have been some studies in Indian workplaces looking at the link between the practice of karma yoga and empathy. For some measures, it was shown that it is positively related to empathy, but not in all cases. When workers were experiencing a high level of personal distress, it did not cause any significant increase in empathy.

Benefits of an Altruistic Lifestyle

Although not strictly an exploration of karma yoga, there has been a ton of studies looking into the effects of altruism and compassionate behaviour on one’s health. In general, research shows that acting in a compassionate, altruistic way can have significant positive effects one a person’s well-being and happiness.

There also seems to be a link to physical health. It is important to note that these effects have a limit, as one can become overwhelmed from helping too much. It is a fine balance, as helping others for the goal of improving one’s own happiness is not karma yoga.